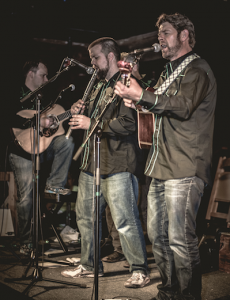 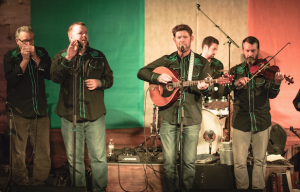 In the Early 2000’s, Singer and Bouzouki player, Tony Davoren departed Riverdance the show and hit the road for a new adventure, one that would lead him to the Bayous and Prairies of Cajun country. Here he met Mitch Reed (accomplished fiddler and Bass player with Cajun bands, Balfa Toujours & Beausoleil) and Pete Dawson (versatile young flautist, whistle player and singer from Baton Rouge). Before long they were exploring the musical and cultural connections between Ireland and Tony’s newly adopted home.
Music jam parties abound in southwest Louisiana. The region is home to a wealth of versatile musicians who gather together regularly, drawn by the local Bonhomie, good food, and a mutual love of traditional music of all kinds. The band Celjun evolved out of these gatherings, a small circle of friends who continued to explore the merging of Cajun music with that of Ireland and Appalachia, and a curious delighted audience followed. The resulting blend is at once both familiar and surprising: Irish Slip Jigs with Prairie Reels, an Appalachian fiddle hoe-down accompanied by Irish bouzouki,  Cajun fiddle two-step in unison with the Irish Flute, Irish jigs, reels, and hornpipes, all sharing a strong sense of groove and creating a new fusion: CELJUN MUSIC.
Tony Davoren – Bouzouki, Guitar, Mandolin and vocals
Pete Dawson – Whistle, Flute and vocals
Mitch Reed – Fiddle and Bass